Maggie’s Serve an Ace for The Queen’s Club Members

The Aegon Championships at Queen’s Club is one of our favourite summer events. The venue, which is located in Baron’s Court, welcomes many of the International stars of tennis. This year, defending Wimbledon and Queen’s champion, Andy Murray is due to take centre stage at the Championships again.

Pippa and Carole Middleton enjoy the action at Queen’s Club

The occasion is one of the highlights on our British Summer Social Season Guide and aside from the action on the court; it will welcome a host of VIP supporters. Those typically spotted in the audience include the Duchess of Cambridge and her sister Pippa Middleton, along with the likes of Kim Sears.

When they are not watching the skilled players, the Members of Queen’s Club are likely to be found relaxing in the Maggie’s enclosure. The Maggie’s enclosure made its debut last year and when we stopped by, it was busy with guests enjoying the 1980s theme that the Chelsea nightclub is so famous for embracing. 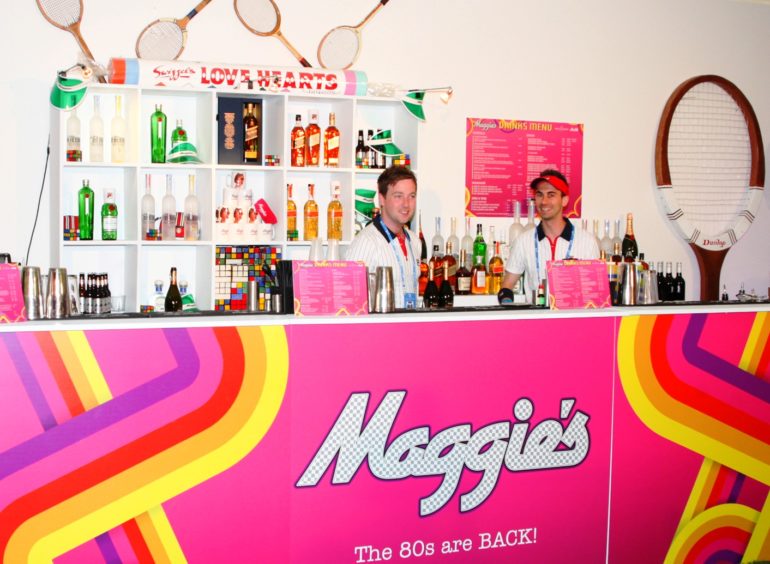 Maggie’s Serve an Ace for The Queen’s Club Members

The retro player’s lounge will take on the same format this year with a ping pong table, 80s arcade games, oversized wooden rackets and ball shaped bean bags. Bespoke Tanqueray No. TEN cocktails will be served alongside Moët champagne and the enclosure will also include tennis court markings, a vintage umpire’s chair and rollerskaters kitted out in tennis whites and Maggie’s branded visors.

It is certainly worth visiting during your annual trip to Queen’s Club.

The Maggie’s enclosure at The Aegon Championships will be open from Monday 9th June to Sunday 15th June 2014. It is located at The Queen’s Club, Palliser Road, London W14 9EQ. Maggie’s Club is situated at 329 Fulham Road, London, SW10 9QL