Rossana to launch the ultimate luxury kitchen at the Saatchi Gallery

Rossana will launch a new kitchen model, K-In K-Out, at the Saatchi Gallery on Thursday Feburary 9th at a special event supported by Wallpaper* magazine. Designed by Massimo Castagna, the highly innovative K-In K-Out takes the inside out and brings the outside in. It is one kitchen with one aesthetic but with both indoor and outdoor versions it facilitates two different uses.

K-In and K-Out look identical and feature a free-standing island unit which when closed looks monolithic yet also appears to magically float thanks to the dramatic overhang on the high, burnished steel supporting plinth. This stunning effect is further emphasised when the island’s cover tops are slid open, modifying its form and proportions and revealing appliances and work surface beneath. 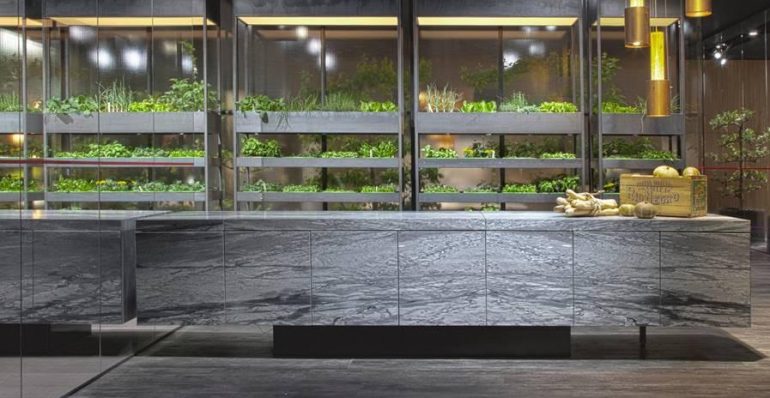 The indoor version features a steel framework with internal carcasses made from wood and patinated metals, whilst the framework of the outdoor version is made entirely from steel. The doors and tops of both versions combine the chosen finish with cellular aluminium and the hidden guides for the sliding tops common to both ensure a weatherproof seal for K-Out.

There are a selective range of finishes available including a natural grey stone with irregular veins in darker shades of grey to black, heat-treated elm, eucalyptus and dark olive veneer, to name a few.

In keeping with the groundbreaking reputation for which Rossana is renowned, the event will not only feature the unveiling of K-In K-Out, there will also be the opportunity to experience the kitchen in an impressive and realistic scenario. In addition to this, there will be an exhibition of paintings and sculpture by artist Philipp Rudolf Humm.

The artworks on show by the Londonbased Belgian/German artist will include a c. 4 x 5 m print of his oil painting, K, which depicts the island of the K-In K-Out as an altar. The original painting will also be on display alongside other works from his Urban Portraits series recently shown at both Riflemaker and CNB Gallery in London.