A unique buzz at The Jam Tree Clapham

While the eclectic Loft Bar at The Jam Tree’s Kings Road location has previously been featured in The Sloaney, the focus of my visit to their Clapham branch was to sample the gastropub’s diverse food menu. Very popular amongst locals, The Jam Tree is  set within a large townhouse located in the very heart of Clapham Old Town and has a ‘colonial’-inspired menu that offers a cuisine to satisfy every palate. 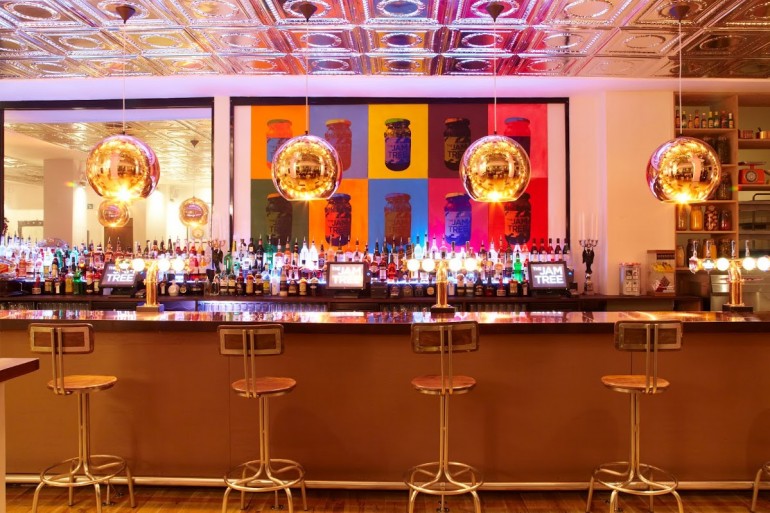 Walking through the sliding doors at the entrance, you step into the raised dining room situated next to the bar. Despite the gloomy, damp August evening outside, the dining room was bright, colourful and airy offering both communal and traditional dining tables. There is a very open feel to the area – a far cry from the claustrophobia I have sometimes felt at other smaller venues. Lending to the brightness is an embossed tin ceiling; a uniquely North American feature whose popularity reached its peak in the mid-19th century and which, for The Jam Tree, further reinforces its ‘colonial’ credentials.

Behind a ‘hidden’ library door, you find another less formal bar area replete with comfortable leather sofas and, somewhat bizarrely, a table-tennis table. This bar area also leads to The Jam Tree’s other showpiece – its charming and (deceptively) large garden which is perfect for a sunny weekend brunch. Unfortunately, due to the inclement weather, the garden had closed early on this particular day, but I could imagine how packed it is on a balmy Sunday afternoon.

The Jam Tree sources ingredients locally, with meat being supplied by Moen and Sons and fish coming from South Coast Fish just up the road in Battersea. All cheeses are supplied by Hamish Johnston, who have a cheesemonger by Clapham Junction. 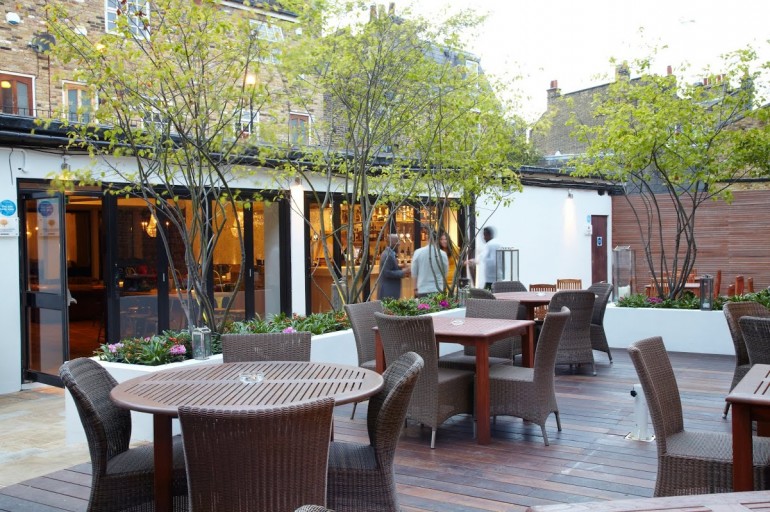 Perhaps due in part to the ravenous appetite I developed while running late, my eyes glazed over the ‘Super Salads’ listed on the menu – each is less than 350 calories if you like keeping count – and were transfixed by the veritable meat feast presented under the ‘Dude Food’ section. The Jam Tree home smokes their meat in the garden so I was looking forward to sampling some succulent, slow cooked cuts. I opted for the Jacob’s Ladder Beef Short Rib, while my friend selected the Pulled Pork burger.

To begin our meal, we ordered the Grilled English Asparagus and Sotong Manis starters to share. While the asparagus was perfectly grilled and the accompanying truffled hollondaise was delicious, the highlight of this course was undoubtedly the Sotong Manis – battered sticky squid with a chilli and garlic dipping sauce. This was, by far, the best combination of crispy batter and sticky sauce I have eaten and it was elevated to another level by the quality of the squid itself. The Sotong Manis is one of the most popular items on the menu, and our waitress gave us a knowing smile as she saw us tuck in. Despite the very generous portion size, we were left wanting even more and I’m not sure that any amount would have satisfied my cravings!

My main of the beef short ribs was incredibly tender having been braised and smoked for over ten hours before being barbecued with a Maple glaze. My only slight criticism of the dish is not of the meat, but of the red slaw which accompanied it as it contained far too much vinegar and was too acetic for my taste. The pulled pork burger was served with Pico de Gallo, Tomatillo salsa and fries and was described by my friend as being the “best pulled pork she has had in London”. Coming from someone who grew up in the American Deep South, where they know a thing or two about smoking meat, this was high praise indeed.

Already stuffed to the brim, but not quite suffering from meat sweats, we decided to share a dessert and after much to-ing and fro-ing – there are a number of enticing options! – we decided to split the Salted Caramel Chocolate Brownie which was just the right level of ‘gooey’ with a hint of salted caramel. Coming a very close second in our negotiations and just missing out was the Strawberry Jam and Peanut Butter Cheesecake which I will make a point to try on my next visit.

My friend had evidently had a long day at work, but our leisurely meal perked her right up and as much as I would like to say that it was my company that did the trick, I must admit that it was the food, service and atmosphere at The Jam Tree that deserves all of the credit.

Our experience at The Jam Tree was wonderful, and despite the relatively quiet Tuesday night, we sampled some of the unique buzz that regularly attracts a broad cross-section of Clapham’s residents.  While my trek to Clapham from home in North West London is not the easiest, the Sotong Manis is something that I would happily cross borders for and if you happen to be in South London, I would strongly recommend that you pay a visit to what is fast becoming a Clapham institution.

The Jam Tree Clapham is located at 13 Old Town, London SW4 0JT Reservations can be made by telephoning 020 3397 4422 or visiting www.thejamtree.com/clapham