Luxury on the Italian Riviera at Royal Hotel Sanremo

I have enjoyed visiting the South of France many times before and I have an equal amount of affection for its neighbour Italy. During my latest visit to this part of the world, I combined a trip to both countries and crossed the border to explore the coastline of Liguria.

After flying into Nice and spending a few days on the French Riviera, I chose to venture further along the coast and visit the Italian city of Sanremo. Sanremo is located a few hours (depending on whether you drive or make the most of the train links) along the coastline from Cannes. The journey to this city passes through Eze, Monaco and Menton, which means that you can admire many beautiful French villages on the way. 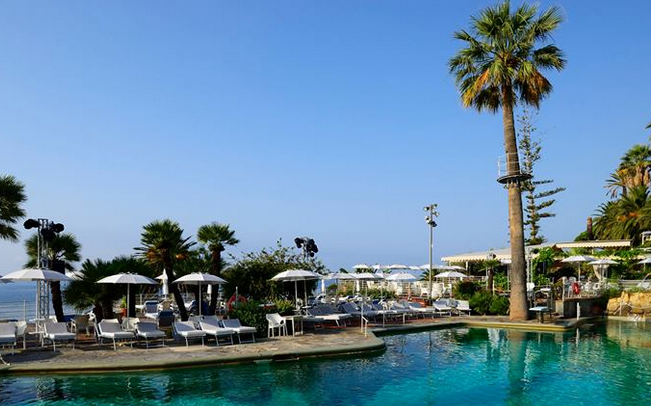 Royal Hotel Sanremo gets plenty of sunshine in the summer

Once in Italy there is a subtle change in the architecture and glimpses of Italian flags also mark your arrival in a different country. While Sanremo attracts plenty of tourists during high season, it also maintains its authentic charm. The sand is not as golden as you will find in Cannes but there are several beach clubs that make the most of the warm climate and man-made barriers in the sea that allow for a relatively smooth and protected swim.

The Royal Hotel Sanremo overlooks this part of the city and offers guests panoramic sea views. The five star hotel has been designed in tiers on the hillside, with the main building resting at the highest point. The impressive salt water swimming pool and pool restaurant are situated on the next level down and the beach front makes up the final layer beneath. The pool is salt water and notable because it is very deep and also has a diving board, as well as hidden coves, which provide a sea-like experience. 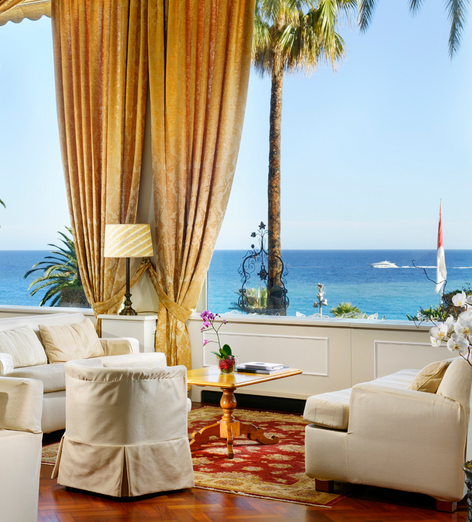 The views at Royal Hotel Sanremo are stunning

The Royal Hotel Sanremo is part of Leading Hotels of the World and it is the most upmarket property in Sanremo. The interior of the hotel is very grand; it showcases luxury Italian furnishings and hosts several mini-boutiques that display opulent jewellery and watches from leading brands such as Rolex.

The grand piano is played most evenings and the sound is projected outside onto the main terrace, which is popular with guests wanting to look out to sea whilst enjoying an early evening drink. All of the dining facilities, including the pool bar, offer far-stretching views and this is also the case with most of the rooms. 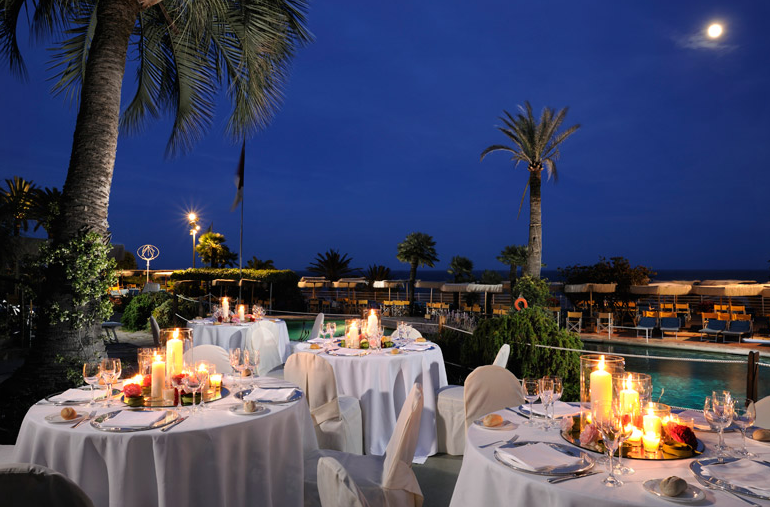 Dinner at Royal Hotel Sanremo can be enjoyed on the terrace

The suites are substantial in size and many boast large windows that capitalise on the hotel’s position and the surrounding landscape. The most impressive place to stay in the hotel is the Suita Aurora. This exclusive room is ideal for those seeking privacy during their stay. It boasts a large private sun terrace, which is equipped with sun beds, and also includes a hot tub. The spacious suite can accommodate up to six people for dinner and also has a very large living area.

If you stay at the Royal Hotel Sanremo you can take advantage of the terrace restaurant where the menu offers a selection of fine dishes. The cuisine includes local favourites but also a host of creative recipes that ensure broad Ligurian and Mediterranean influences. 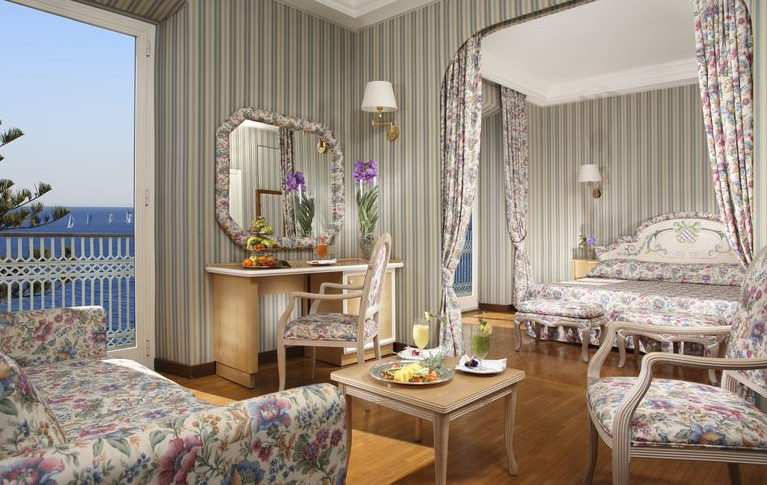 The suites at Royal Hotel Sanremo are very luxurious

If you want to explore further afield, a ten minute walk will take you to the city. The Old Town area of Sanremo has several pretty streets where restaurants offer al-fresco dining and I would recommend enjoying a stroll down Via Francesca Corradi. Some of the more popular dining destinations on this quaint street require advance booking but you are also likely to stumble across somewhere that can accommodate you at the last minute.

The city has plenty of top fashion shops and the pedestrianised high street Corso Giacomo Matteotti is where many of these are located. Depending on what time of year you visit Sanremo, this street may prove particularly lively at night. 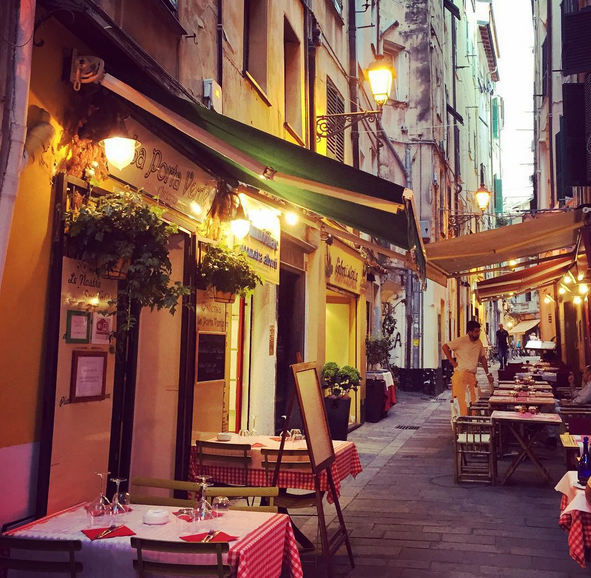 The pretty streets of the Old Town in Sanremo

On the first Saturday in September it was packed with music performances and even the hotels and bars with street dining had DJs and live bands playing music. This makes the atmosphere very vibrant and Sanremo has a reputation for hosting music events throughout the year, including the well-known Sanremo Music Festival.

During my visit I also watched some open-air theatre, which was performed in the heart of the Old Town area and proved popular with locals and visitors alike. In addition to the lively arts culture that is present in the city, there is a large market held on a Saturday. This is an opportunity to buy clothes, fashion accessories and also some delicious food. Truffles, Italian spices and pesto sauces will prove wise purchases. 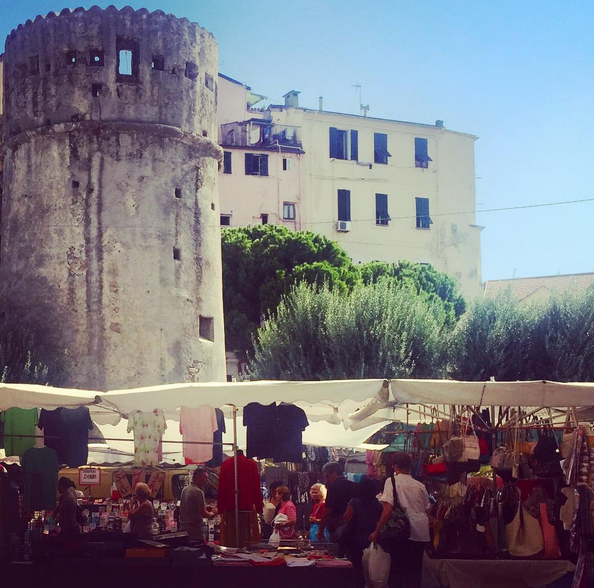 The market in Sanremo is popular on a Saturday morning

With beautiful weather, friendly people, an energetic culture and plenty of rustic Italian charm, Sanremo is worth a trip across the border from France. For those who want to enjoy a luxury stay, the Royal Hotel Sanremo will certainly meet your needs and it provides a fabulous place to relax for a mini break or a longer stay.

Reserve at room at the Royal Hotel Sanremo by visiting www.royalhotelsanremo.com or calling +39 0184 5391